examples:
Mary, stop obsessing about your lost love. Don’t you realize people are avoiding you because you’ve become such a chronophage!

I don’t like your friends.  They’re such chronophages that they suck the energy right out of me.

The French have been using «chronophage» a lot lately. 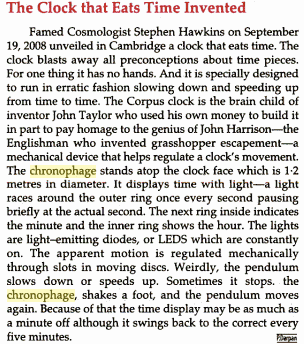 Additionally, from 2010, there is this redundant example: «Les chronophages du temps», although the article gives good advice on how to rid oneself of wasters of time who assail their victims on the phone, during inopportune visits, through the mail and email, and, my favorite, at college committee meetings, which do nothing but reorder the world on paper and in theory.

There is also this bizarre but riveting example in English, from the publication Pratiyogita Darpan, November 2008, 2013, p. 813.  It refers to an actual thing, an invention, and takes the meaning of chronophage at its most literal:

More on this extraordinary timepiece comes from “The Corpus Clock”, Sept. 19, 2008:

“It is terrifying, it is meant to be,” said John C Taylor, the creator and funder of an extraordinary new clock to be unveiled tomorrow by Stephen Hawking at Corpus Christi College in Cambridge. “Basically I view time as not on your side. He’ll eat up every minute of your life, and as soon as one has gone he’s salivating for the next. It’s not a bad thing to remind students of. I never felt like this until I woke up on my 70th birthday, and was stricken at the thought of how much I still wanted to do, and how little time remained.”

So now there is another excuse to be added as to why a student was not able to turn in her homework on time.

“Well, you see, professor, there was this monster, and this monster ate up all of my time!”

The Chronophage: the monster that devours time.

Roy Luna: Roy Luna is a retired French professor who dabbles in the arts, tinkers with music, reads heavily in fiction and history, but does not neglect biographies or science. His main efforts these days are devoted to writing a trilogy of novels based on events occurring during the years between the death of Voltaire (1778) and the French Revolution (1789-94), years rich in both enlightened human progress and dark, evil terror. Three times a week he volunteers at Dunbar Old Books, making sure orphaned books find their way to other readers. His library at home may have surpassed the 10,000 mark, and he valiantly tries to read them all… The one important thing to retain about Roy is his horror at the sins, the injustice, the atrocities, the crimes against humanity that are perpetrated and justified in the name of religion. Any belief system that condones such savagery has discarded its humanity, abandoned its compassion, and forsaken its principles of empathy, tolerance and love of one’s neighbor.